Working in partnership with Debate Academy, Year 5 and Year 6 children have the opportunity to take part in a fun, inclusive and ultra-competitive 12-week after school club!

Aiming to give children a voice and develop their confidence, communication and language, children take part in a series of after school battles where one-hour quick fire debates make every child think on their feet!

But that's not it. To conclude the 12 weeks of debating, all children also have the opportunity to take part in their very own inter-school debating tournament, which is held at Liverpool University!

Keep an eye out below for weekly updates of what the Banks Road Debaters have been up to...

Firstly, the children played a game called Balloon Debate. In this game, the children pretended that they were in a hot air balloon which is losing height rapidly and will soon crash because it is overweight! The decision had to be made: which five passengers were the children going to get rid of and why? The aim of this game is for the children to come up with a really convincing reason or ‘point’ as to why they should stay in the balloon.

The children then ran a debate to discuss whether or not, ‘This House believes children should be allowed to elect their own teachers?’.

The children worked in groups and came up with reason either for or against. Once they had their ideas down on paper, the debate started! This was a fantastic debate with very mixed views and reasoning.

This lesson was based on British Values. The children were put into groups and given the task to create their own political parties. The children then created their own manifestos, which included three sections with promises they would make if their party was elected.

The first category was Rule of Law. The children had to come up with laws that they would make if they were elected.

The second was Individual Liberty, which is based in our rights as humans. The children had to come up with what they believe to be the most important rights we have as people.

The third category was Mutual Respect and Tolerance. The children were given the task of thinking about things that we should be more tolerant and respectful of in our society.

Each group were given the roles of campaigners or voters. The campaigners moved round the tables with the aim to convince other children to vote for them. Voters stayed at their table and listened to their ideas then decided who to vote for!

Once the campaign was over, the children went to a vote and discussed how the exercise related to debating. The reasoned conversation and discussion was amazing! Well done everyone!

This lesson was based on emotions and how emotions can convey a message and a meaning.

After a class discussion about tone of voices and body language, Jack explained that all of these elements are called stage presence and they are important when thinking about delivering a speech.

Jack then revealed the motion “This house believes men have easier lives than women.” "Do you agree or disagree - and why?"

The children were  asked to write a speech to either defend or oppose the motion.

Once all the children had finished, each group was given an emotion (happiness, excited, sad and shy) and they had to deliver the speech to reflect the emotion they had been given. Children were then asked to vote who had the best speech!

In the final part of the lesson, the children played Mamamoo. In this game, one person volunteers and chooses an emotion that they are feeling. They must tell the class how they are feeling but they can only use the word Mamamoo. They should use their voice, facial expressions and movement to convey to the rest of the class what they feel. The person who guesses correctly gets to stand at the front and play the game next.

To conclude the lesson, the children (with Jack in support) went on to discuss the importance of stage presence in debating and why we took part in today’s activities.

This lesson focused on the question of, “What is the internet?”.

After an interesting discussion on the pros and cons of the internet age, the motion was revealed that “This house believes that, in the future, computers will replace teachers.”

With two groups of debaters decided (proposition and opposition), the children were given folders with debate materials and prompt sheets. They then spent 5 minutes looking through the folders and talking with their team about the information inside.

Children were then told that they were going to create an argument using the debate materials provided.

They spent time developing the argument in readiness for next week’s debate!

After the arguments for and against were prepared, the debaters played the game “If I ruled the world”. Children were asked to say what they would do if they ruled the world. The rest of the class then voted based on what world they would like to live in.

To start this lesson, the debaters watched three videos of modern robots, who are made to do different jobs in homes, warehouses and shops. After watching the videos, we discussed whether robots will take over jobs in the future. After much discussion, the debaters were reminded of last week’s motion “This house believes in the future computers should replace teachers”.

The children were given five minutes to review and rehearse their speeches and, once they had finished practicing, the debate bagan!

In the first round, after great speeches from both proposition and opposition, the judges declared the debate a draw.

After much deliberation by the judges the winner was announced, which was opposition!

So, according to our debaters, future computers will not be replacing teachers anytime soon!

The 'Debater of the Week' was given to Amber for her amazing contribution and her enthusiasm during the debate!

After the exercise was completed, the debaters were asked to share their work and discuss how both worlds are different.

The debate topic was then revealed: “This house believes that people don’t need to look after the environment”.

The children were chosen to either go on the proposition side or the opposition side and subsequently went on to prepare their arguments. In the final part of their argument, they had to use the skills they had learnt at the start of the lesson and explain why their world is better than the other teams' world!

The lesson concluded by discussing comparatives and what had learnt through debate club.

The 'Debater of the Week' was given to Ellie-Mae Needham for her fantastic effort throughout the lesson.

The first task equipped the debaters with questions to debate:

After the children completed the worksheet, the answers were then revealed:

We then went on to discuss the dangers of pollution and how it causes problems in the world we live in.

After that, the children were given their work back from last weeks debate club. This included feedback for each child to try and improve their arguments.

All debaters were given judging sheets and told that they were going to practice judging! We then discussed what makes a good debater, for example confidence and content.

Children were then selected to go up and defend their side (proposition or opposition) and, in addition, official judges were also chosen to judge the debate!

After a fantastic debate, the official judges were deadlocked and could not decide so the vote had to go to the rest of the class and the decision went to opposition (This house believes we should look after the environment).

During the last part of the lesson, a discussion took place about the importance of stage presence when debating.

The 'Debater of the Week' was given to Ruby for her fantastic work ethic!

In the opening part of the lesson, we discussed the trolley problem. This is a thought experiment where a trolley is barrelling down the railway track and ahead, on the track, there are five people. The trolley is headed straight for them. You are standing some distance off in the train yard, next to a lever. If you pull the lever, the trolley will switch to a different set of tracks. However, you notice that there is one person on the side track. You have two options:

After much discussion, most debaters considered that option 2 was the better choice as it injured less people.

Debaters were told that the reason for this discussion is so that we can use gravity and impact to improve our arguments.

The children were told that it is important to use gravity and impact to help strengthen their arguments.

The motion was then revealed: “This house believes that footballers are paid too much.”

Both sides then proceeded to prepare for the debate next week.

Lastly, the children played a game called Balloon Debate. In this game, the children pretended that they were in a hot air balloon which is losing height rapidly and will soon crash. The decision had to be made: which five passengers were the children going to get rid of and why? The aim of this game is for the children to come up with a convincing reason as to why they should stay in the balloon. The children had to choose an occupation to represent and say why their occupation was the most important. Our debaters chose to be Teachers, Farmers, Authors, Game Designers and many more.

After two exciting rounds, the lesson came to an end and the 'Debater of the Week' was given to Jessica for her amazing effort and her performance during balloon debate!

The debaters started off by discussing footballers' pay and whether they deserved it or not. The children had a fantastic discussion about the topic. Some debaters stated that ‘all they do is kick a ball around a field’. Others felt that they deserve the pay because they entertain a lot of people and give a lot money to charity.

The children were asked to read through their debate speeches one last time and make amendments based on the feedback that was given to them.

Once the debaters had read through their speeches, they were told they were going to learn a new skill called rebuttal. A rebuttal is a counter argument that you can use at the start of your speech to show the judges that you disagree with the other team.  The children were given the rebuttal sheets so they could practice the skill during the debate!

Children were then put into teams of proposition and opposition.

After a fantastic debate, the proposition team was announced as the winner for their stage presence and clear explanations.

We then played the game 'Why, why, why?'

This game helps the children to improve their explanations when forming an argument, which in this case was ‘whether uniform should be banned?’. Children were continually asked the question 'Why?' and, under certain pressures, had to continue to give reasons for their answers!

Debaters then played a game called 'I couldn’t disagree more!', which helps improve the children's rebuttal skills. This is where students are given a statement and they are asked to give reasons why they disagree with you.

After two exciting games, the lesson came to an end and the 'Debater of the Week' was given to Abigail for her amazing attitude and performance! 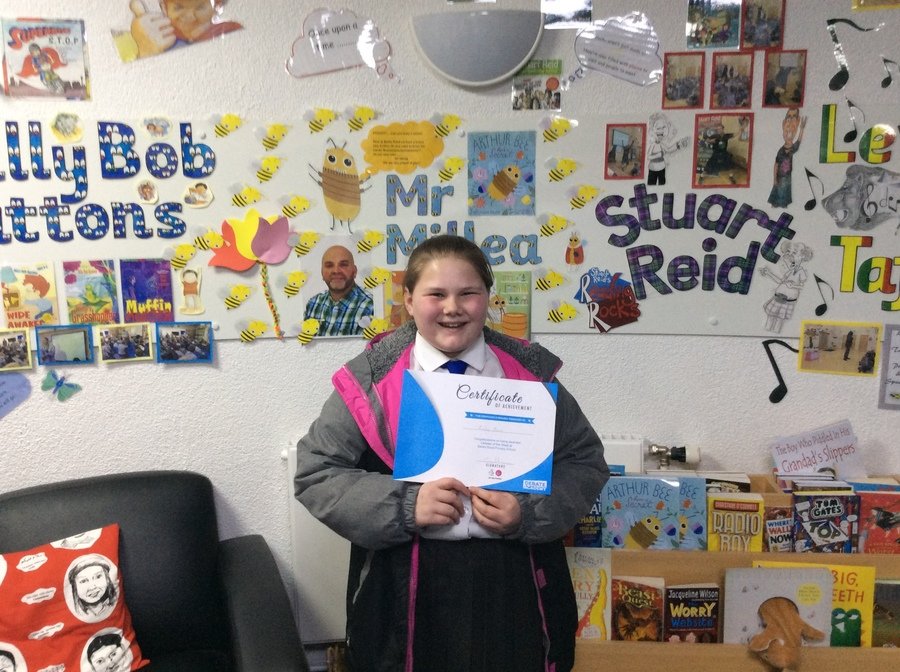 Well done to Ruby - our Lesson 7 'Debater of the Week'! 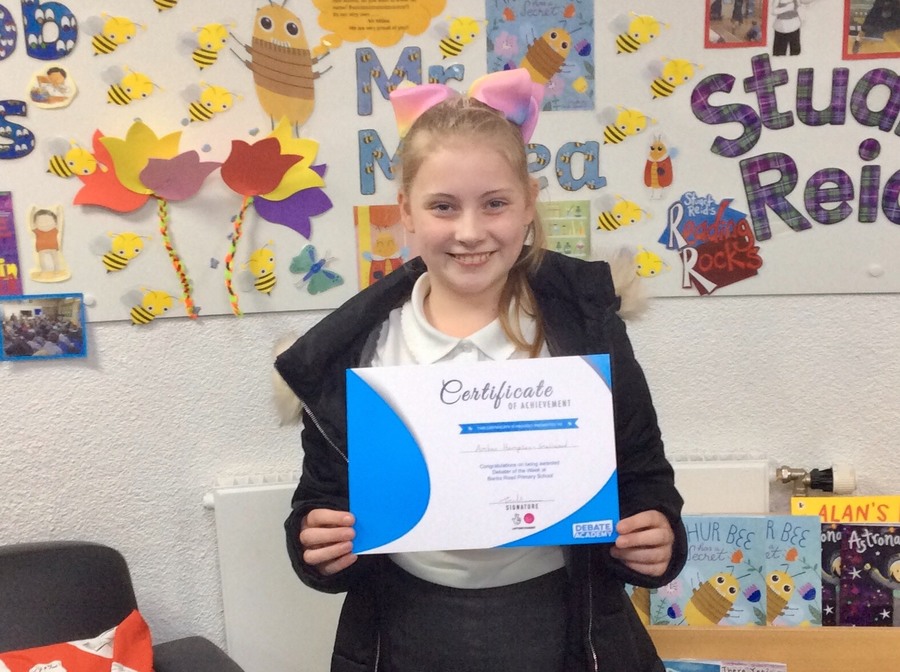 Well done to Amber - our Lesson 5 'Debater of the Week'! 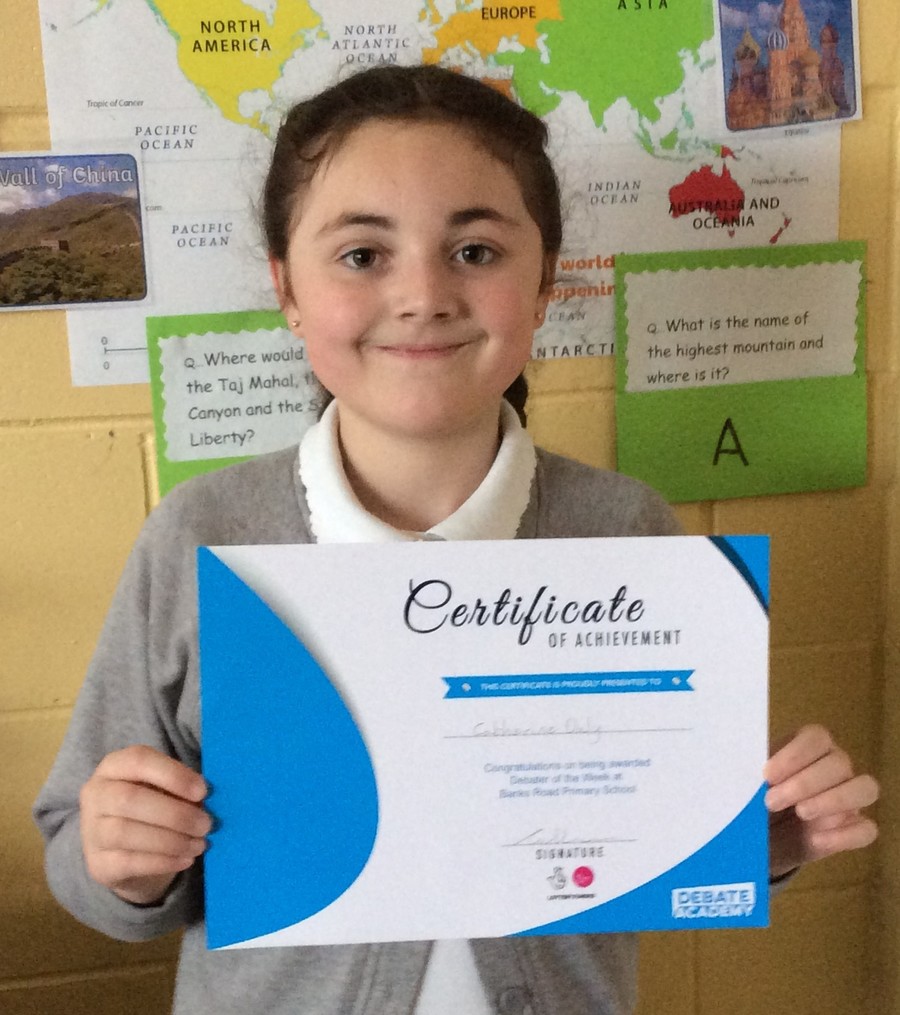 Well done to Catherine - our Lesson 3 'Debater of the Week'!