A Brief History of Banks Road

The original school was built between 1904 and 1907 and was in use until December 1999. Whilst it was being built, the pupils were in a temporary corrugated iron building, which was near St Francis Church in Garston Village.

The school (above left) was damaged by a bomb during the Second World War (1940). Records show that one wing was badly damaged and the school was closed for a week. The school was originally a secondary school, with girls and boys separated. It eventually became separate infant and junior schools, which were later amalgamated.

The new school, built at a cost of £1.6million, was opened on January 10th 2000. For a more comprehensive history of the school, read "The History of Banks Road School" by Barbara Price.

Children raised money for Marie Curie Cancer Care by dressing up as a favourite character from a book.

On the last day of the Spring term, they paraded round the school playground and each child was presented with a Marie Curie daffodil brooch.

In the past, Headteachers had to keep a record of events that happened in their school; we have kept logbooks dating back to 1927.

Here are some examples (click on the links to see the extracts)...

The Move into the New School

Before Christmas 1999, 350 boxes were delivered to school so that teachers could pack everything for the move to the new school. It cost our school £3,000 to move.

On the 10th January 2000 the school was ready for the children to start.

Introduction
Our old school was semi derelict and unsafe, the roof was leaking, the walls were weak and it was falling apart. So it was decided to build a new school on the same site as the old one. Our new school cost £1.6 million to build. It has 11 classrooms, a nursery with its own playground, a library, a computer suite and a hall which is used for assemblies, PE and dinners.

The Building Of The New School
Our school took 1 year and 6 days to build.

Pic 1: First they dug up the tarmac in the playground where the infant school used to be...
Pic 2: then they put down the foundations...
Pic 3: next they inserted the stanchions and girders...

Finally they started on the brick work. When they had finished the brick work they put in the double glazed windows and completed the inside of the building.

The Demolition of The Old School 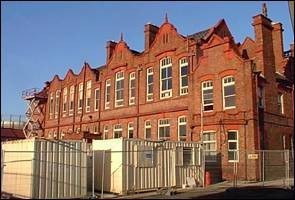 The demolition started when the builders knocked down the canteen after we had moved into the new school. The builders then removed the roof tiles off the old school building.

Next they took out the flooring, pulled out the joists and knocked down the walls.

When the old school was fully demolished, the space was replaced with a car park for teachers and visitors and also a playground for the pupils of Banks Road School.